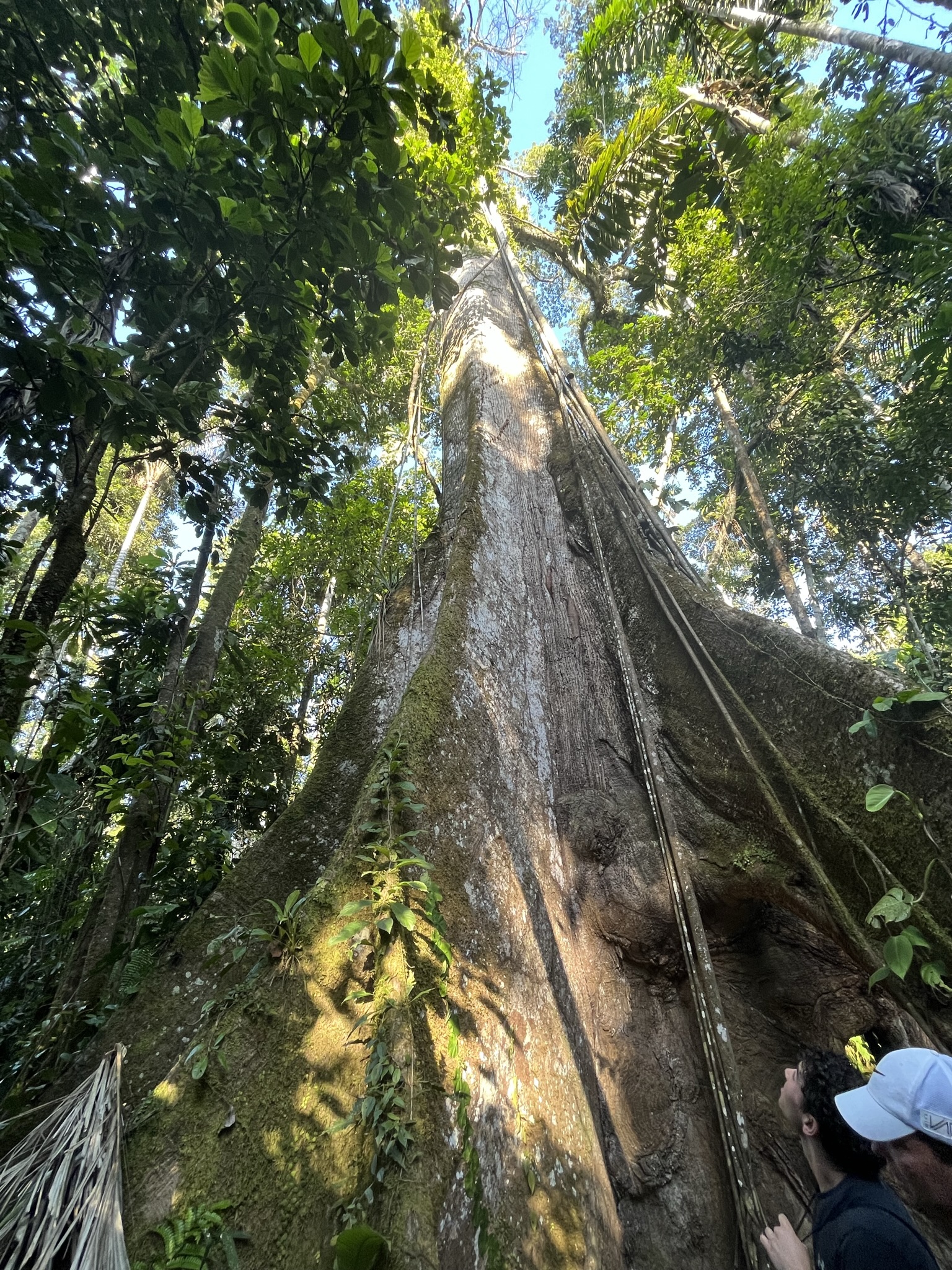 The Rainforest in Ecuador and the immediate need for sustainability

I was lucky enough to spend three weeks in Ecuador over the Christmas and New Year holidays. During that time we managed to get a whirlwind tour of Quito, the Amazon Jungle, The Galapagos and a road trip through glacier capped peaks of the Andes, passing through many quaint colonial villages along the way.

A few months beforehand, I read ‘Confessions of an Economic Hitman’ by John Perkins and how as a result it had affected Ecuador as a country financially, economically and historically.

We chose Ecuador because of its more ‘compact’ size in comparison to its neighbours, Colombia and Peru but its proximity to the Pacific Ocean was also a lure (especially when  coming from Ireland in December!) also, because of its diversity. Ecuador is considered one of the world’s richest countries in terms of biodiversity, tourism and environmental preservation and,  as an animal and nature lover it seemed like the best choice within the timeframe we had.

Several things struck me about this amazing country and visiting there has left a big impression on me.

1 – The emphasis on sustainability, Quito’s international airport is the world’s first sustainable airport, build with reused materials, for a bioclimatic architecture, powered by renewable energies.

2 – This historic district was the first city named a UNESCO World Heritage Site and is noted for its narrow streets, Spanish colonial architecture and historic attractions.

3 – The lack of rubbish on the street even in Quito.

But mainly I was taken aback by the Rainforest.

Ecuador occupies a huge portion of the Amazon rainforest with thousands of species of plants, animals and insects and we were lucky enough to have the once in a lifetime opportunity to visit.

After taking a flight from Quito, to Coca, we took a 3.5-hour motorized canoe ride down the Napo River. The Napo River (Río Napo)  is the source of all life in the Ecuadorian Amazon, with its origins on the eastern slopes of the central Andes where it ultimately drains into the Amazon River.

From there we took a short hike followed by a canoe ride to the a spectacular setting on the  inland lake of Pilchecocha (Laguna El Pilche) where we were staying while in the Amazon.

So that was the start to our three days there, where we spent our time stalking various species of monkeys, observing birds, avoiding many insects and learning about the diverse trees, many different animal species as well as the indigenous communities of the rainforest. Basically, absorbing the rainforest in all its glory!

First of all, of course….

2 – THE RAINFOREST IS A PARADISE FOR BIRDWATCHING.

We saw birds that normally I have only previously seen in cages. Thanks to our very observant and informative guides we saw dusky-headed and cobalt-winged parakeets, chestnut-fronted macaws and yellow-crowned, blue-headed and orange-cheeked Parrots. We saw wild Toucans (yes, just like the Guinness ad) and so many more. It really was such a joy to hear and see such beautiful birds, wild and free in their home in the rainforest.

We saw leaf-cutter ants, marching,  colourful green armies interspersed with occasional red flowers. We hopped over Bullet ants (making sure not to disturb them as they allegedly have the most painful insect bite in the world, their bite has been compared to the pain of being shot, earning the Bullet ant its name!). We avoided tarantulas, ugly-beautiful beetles, admired centipedes, delighted in seeing the most big beautiful butterflies, marvelled at Stick insects and keenly observed camouflaged mantis and SO much more.

I couldn’t keep up! According to a recent study a staggering 400 billion trees belong to over 16,000 different species that make up the expansive Amazon rainforest. That study also revealed that a mere 227 species make up half of the total trees across the whole basin. So I only remembered a few….(Forgive me, my horticulturist friend Aisling would be disgusted with me).

The ‘hyperdominant’ species of the rainforest include the rubber tree as well as an astounding different types of palm trees. Trees like the Palla tree, which the indigenous people have been using for years to make thatched roofs, their sturdy leaves can last from five to 10 years. The Huasaí or Palmito tree, is thought to be the most common tree in the rainforest and is usually found in flooded parts of the forest, the indigenous communities, often use its berries from this tree as a sweet treat. Then there is the bizarre ‘walking palm’ with its unusual appearance, its trunk can reach up to 20-metre and it is supported by long, stilt-like roots, measuring up to 1.5m. These roots allow it to move through the forest by a few centimetres, with new roots growing towards sunlight as they replace old ones. There are about 2.7 billion of these throughout the rainforest, and their wood is widely used for flooring in Amazonian houses.

For the Indigenous Amazonian communities, almost every plant found in the Rainforest holds a medical purpose, for example the oil of the Ungurahui Tree is extracted to make juices and ice cream. Other palm trees such as the Huicungo Tree, are single-trunk palm trees that have spines on their trunks. They grow up to 15 metres tall, and their fruit and leaf buds are edible. Their hard seeds contain a soft substance, which is used to make moisturiser such and the spines on the trunk can also be used as cheese graters!

The most fascinating tree was the Ivory Palm Tree, vital components of a healthy rainforest ecosystem. A mature tree produces up to eight fruits each year with every fruit bursting with these valuable seeds.  Each tree yields small, dense white nuts made from a material that closely resembles elephant ivory, usually about the size of a hen’s egg, although this varies depending on which type of ivory palm is under discussion. The white substance is called vegetable ivory when it is being sold.

People who are concerned about elephant poaching encourage the use of vegetable ivory, which is very difficult to distinguish from true ivory. Individuals working to save the rain forest also encourage the production and sale of vegetable ivory products, creating economic value for living rain forest plants. Once fully grown, the Ivory Palm Tree produces fruit for over 100 years, so working with this tree is truly a long-term partnership.

The Amazon comes alive at night with a storm of unimaginable sounds. As the rainforest is teeming with animals and insects, I could hear a concert of humming, thrumming, buzzing and chirping, frogs, cicadas, birds and with Howler monkeys making the loudest rainforest sounds, hearing their whooshing sounds is like hearing an air raid siren along with a heavy metal guitar solo, some of them have cries that reach up to 130 decibels!

In our short time, we had to work hard to see the animals. They only come out when they wanted to, (It was Christmas you see) but we managed to see Spider Monkeys, named for their long limbs and lengthy tails, using their tails like an extra arm or hand.  There are seven species of spider monkey and allegedly all of them are under threat, two of them critically. Hunting and habitat destruction, both at the hands of humans, pose the greatest threat.

We saw marmoset monkeys, they claws rather than finger nails and they tend to stay in the upper canopy of the rainforest, eating fruit, insects and their all-time favorite treat: tree sap.

We (un)fortunately missed the anacondas though we spent a dark night looking for them. We also saw caimans, Giant Otters and canoed over Piranhas.

Ecuador’s diverse indigenous population is made of nearly four million people, roughly 25% of Ecuadorians. There are more than a dozen distinct groups in Ecuador, speaking 20 different languages.

Historically Ecuador’s native people have suffered heavy discrimination and today that is still the case, particularly form the loss of lands due to deforestation. Oil, drilling, mining and logging has led to widespread displacement of indigenous groups, and there is then the side effects on families such as drug and alcohol abuse.

One particular tribe we visited while in the jungle was the women of the Kichwa community, the largest indigenous group and they are doing their hardest to preserve their culture.

We visited a group of women who have set up a business informing visitors about their culture, teaching us about how they survive in the rainforest and in turn, we paid for this knowledge, this money goes straight back into the community. These communities are trying to make their voices heard as mining companies and illegal prospectors continuously eye up the region’s natural resources.

The Napo River is the source of all life in the Ecuadorian Amazon and 10% of our world’s animal species live inside the Amazon Rainforest but yet the Rainforest is still being rainforest is targeted.

Even late last year 2022, Police operations in Ecuador are still uncovering shocking levels of environmental damage caused by illegal mining in the far-flung province of Napo, showing how the practice continues to proliferate in remote corners of the Amazon rainforest.

Illegal Mining spreads to the furthest reaches of Amazon in Ecuador

It is only when I saw it with my own eyes that I realise the urgency and importance of protecting the Rainforest, its trees, its diversity and the many animal species that need it for their long term survival.

Oration Speakers is seeking Keynote Speakers who are experts in the area of Sustainability and the environment. If you have written a book on this topic and you already have some experience of speaking at high profile events but you need more help getting your voice heard please contact us at Oration Speakers

For 2023 Oration Speakers is moving forward working with Keynote Speakers and organisations whose focus is on the Green Economy, Sustainability and the Environment. 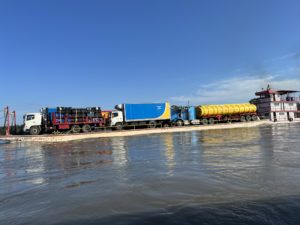