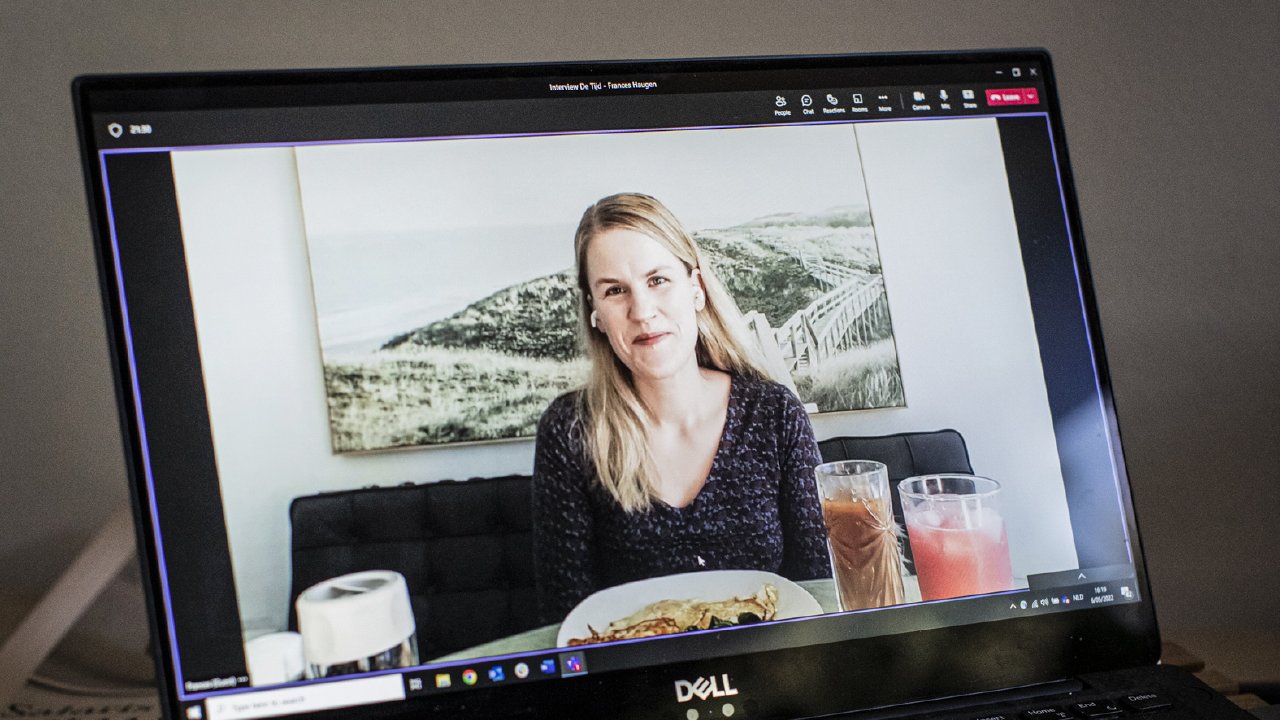 Frances Haugen was recruited to Facebook to be the lead Product Manager on the civic misinformation team, there she dealt with issues related to democracy and misinformation and later she also worked on counter-espionage.

However during her time at Facebook, Frances became increasingly alarmed by the choices the company was making, as a last resort and at great personal risk Frances made the courageous decision to blow the whistle on Facebook. She fundamentally believes that the problems we are facing today with social media are solvable and that we can have social media that brings out the best in humanity.

Oration Speakers is delighted to be working Ms Frances on her upcoming talk in Belgium, this Wednesday. Below is an excerpt of an interview that Frances did as part of Breakfast with De Tijd in advance of her speaking engagement in Brussels.

“Frances Haugen is still standing in front of the stove as she joins the Teams conversation. Her voice is barely audible over the simmering pan of scrambled eggs and spinach. “Give me a few more minutes,” she says, before suddenly leaving. When she reappears not much later, she’s sitting perfectly framed and with extra lighting in front of her computer’s camera, her steaming plate in front of her. It’s 10 a.m. in Puerto Rico’s capital San Juan, where the whistleblower who hung up Facebook’s dirty laundry has been living for some time. She drinks iced coffee and guava juice with her breakfast, while in my slightly less exotic location I stick to a last coffee and an apple, six hours further into the day.

With Facebook whistleblower Frances Haugen, we talk about doom-scrolling teens, an inclusive metaverse, and being able to sleep again.

The 37-year-old American became world famous when she came into the spotlight at the end of September 2021 as the ex-employee of Facebook (now Meta) who shared gigabytes of internal reports with the media and authorities in a well-orchestrated campaign. The conclusion of those thousands of pages: the company above Facebook, Instagram and WhatsApp is well aware of the real problems on its platforms – such as the lack of control on hate speech outside English-speaking countries – but covers them up. The perception that remains is that the largest social media company puts profit above people.

Since then, Haugen has been a face of the movement that fights against the omnipotence of big tech and for fairer and safer social media. She is not crusading against social media, she emphasizes, but against what they have become. To keep growing, Facebook had to keep people on the platform longer. Complex algorithms emerged that serve people with the content that gets the most engagement, and that fueled negativity. Facebook was once a platform for friends and family. We were shown content that we chose ourselves, from people we know, and from groups and pages we consciously followed. But it has slipped into something completely different.’

For her, it always comes down to the question: do we want computers to focus our attention on something, or do we want humans to do that? ‘If we choose computers, the biases built into the algorithms will give the most extreme statements the greatest reach. We need to design social media around the patterns of human communication. We can have software that helps us connect but that doesn’t try to keep us busy for as long as possible, feeding us bad content.”

So a better version is possible, says Haugen. There is even a lot of low hanging fruit. For example, she proposes to help people, especially young people, limit their Instagram use by slowing down the platform from a set time, thereby encouraging users to go to bed earlier so they don’t doomscroll at night. ‘. “There is a public health crisis going on among children. I recently spoke at my old high school, and the principal explained to me what his biggest problem is: an Instagram account with videos of children fighting. He can’t convince Meta to remove that page. Ditto with accounts on which anonymous rumors are posted. What’s more: Instagram directs children to those accounts because the algorithm recommends them. It would be a good start if a company like Meta shows that it respects the dignity of users. That it says: I recognize you as a person, not as a product to sell ads with.’

Shortly after Haugen came out, Facebook morphed into Meta and Mark Zuckerberg’s company opened up a marketing salvo around his vision of the future of the metaverse. Haugen is skeptical. ‘Meta is already having a hard time keeping its unambiguous platforms safe. What about a combination of hundreds, thousands of apps that form the metaverse? When Meta opened up his virtual world Horizon late last year, there was an immediate incident where a woman was bullied. After only a few days they had to build in safety barriers. Then you wonder: had no one thought of this, were there no women on the development team?’

Let’s not forget that the metaverse is a term from ‘Snowcrash’, a science fiction novel by Neal Stephenson. The picture there is bleak. People feel so miserable that they withdraw into a virtual world. Still, the metaverse is worth $20 billion, according to Meta. So we take that pretty seriously. My fear is, if we see them as something innocuous, then ten years from now we’ll suddenly realize that an entire generation of teenagers has stopped hanging out with friends in real life. Learning to make friends or flirt can be awkward, but it’s a fundamental experience. Are they going to make replaceable friends thousands of miles away instead?’

But Haugen doesn’t want to be pessimistic. “There is now an opportunity to do it right and develop the metaverse for people, in an inclusive way. Then everyone benefits. If we don’t have that intention, we will still have software optimized for profit, not the public interest. In order to do it correctly, more people need to know how the algorithms work.’

That’s why she’s so hopeful about the sexy titled but “historic” Digital Services Act (DSA). That law, on which the EU reached an agreement at the end of April and which Haugen helped promote, obliges the large tech companies, among other things, to be more transparent about their products and to show why they give priority to certain content. “Until now, we never had the right to ask questions and get an independent answer. We’ve always had to rely on the info they give, and it’s obviously in their interest not to tell us the whole truth. Those days of ‘just trust us’ are over.’

Haugen’s life has changed radically since she left her job as a product manager at Facebook. Since calling herself a whistleblower, she has spoken to MPs from Washington to Berlin to Brussels, and was named by Joe Biden in his State of the Union address: “Frances Haugen has shown that we must hold social media accountable for the national experiment that is happening.” they run on our children for profit.’ Her polished campaign has also been criticized, in which she is assisted by PR firms with strong ties to the Democratic party.

‘Ah. The Facebook communications team tried to portray me as a vehicle for the Democrats. By the way, my communications team didn’t come on board until two days before the first articles on the documents appeared in the press. And yet it is one big PR machine? What I find interesting: why would someone from the left or from the right think that transparency for platforms is bad? I don’t think enough people care about these matters. If so, I’ll be quiet. I’m not doing it for attention. I mean, I live here in paradise, I’d rather be on the beach.”

In recent weeks, an improbable revolution at Twitter, forever the little brother of her ex-employer, made the news. Tech entrepreneur Elon Musk made an offer for the messaging platform of the blue bird, which he has since put on hold due to a lack of clarity about false accounts.

Haugen surprisingly gives the potential new owner the benefit of the doubt. ‘I am cautiously optimistic. Elon is flamboyant and outspoken. But if you want to send a rocket to Mars, you have to be able to ask difficult questions and accept difficult answers. You cannot be successful at launching rockets unless you are really willing to look very closely at a problem. Mark (Zuckerberg, ed.) doesn’t have that.’

According to Haugen, Twitter is going to be private again. Elon has said he wants to be transparent about the algorithms and remove bots. As a public company, Twitter never had an interest in this, because fewer bots means fewer users and therefore less value. Facebook would also benefit from a stock market exit. These platforms are utilities, they support our information environment and our democracy. I’m a little concerned that he won’t take things like intimidation and bullying, especially women, seriously enough.’

I give Elon Musk the benefit of the doubt.
For Haugen, it is especially important that many more people understand the machinery behind social media and that adequate training is provided in specific data science. She wants to commit herself to this, among other things by setting up an organization that will build an open source simulated social network on which there can be plenty of experimentation. ‘More people really need to understand how the algorithms work, so that they can advise politicians, for example. That so few people understand how the algorithms interact today is unacceptable for a democracy.’

She is happy with the impact she has had so far. “When I came out, I had low expectations. All I wanted was to come to terms with myself and not be complicit in lies. I want to be able to sleep at night. That is certainly a goal in which I have succeeded one hundred percent.’

‘Out there, the impact is much greater than in my wildest dreams. People from all over the spectrum tell me that I helped ensure that a law like the DSA is finally passed. In the US, for the first time in 25 years, a bill on monopoly formation by tech companies has moved past a Senate committee. Senator Amy Klobuchar said that was partly due to my revelations, which have brought an end to the era of just trust us. That’s an incredible feeling.’ ”